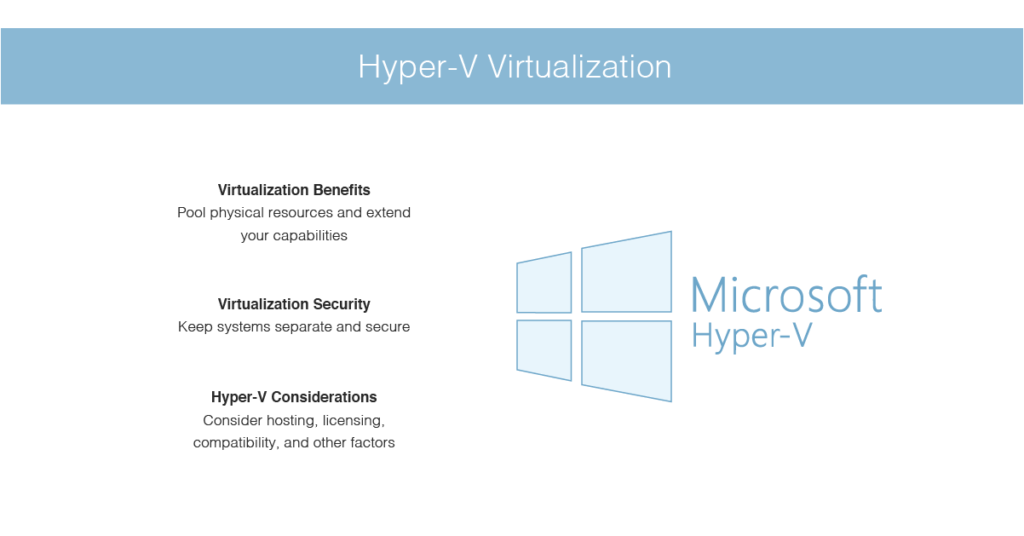 I’ll also give my recommendation for the best Hyper-V virtualization software on the market: SolarWinds® Virtualization Manager (VMAN). This tool outshines competitors by combining an impressive range of advanced functionalities with optimal user-friendliness.

What Is Hyper-V and Hardware Virtualization Technology?

Hyper-V is a virtualization software initially released in 2016 by Microsoft. It’s built into Windows and is widely recognized as a major competitor to VMware Fusion and Oracle VM VirtualBox. Hyper-V can be used to virtualize hardware components and operating systems. Additionally, it’s not limited to the user’s device and can be used to facilitate server virtualization.

There are three versions of Hyper-V available:

Virtualizing resources allows administrators to pool their physical resources. This means hardware can be fully commoditized. In other words, legacy infrastructure that supports critical applications but is costly to maintain can be virtualized to achieve optimal usage.

With virtualization technology, administrators don’t have to wait for every application to be certified on new hardware. They can simply set up the environment and migrate the virtual machine, and everything works exactly as before. When you conduct regression tests, you can create or copy a testbed, eliminating the need for redundant development servers or testing hardware.

One of the most notable benefits of virtualization is—with the right training—these environments can be continuously optimized to achieve greater density and more extensive capabilities.

If you’re new to the game, you may be wondering whether hardware virtualization technology is secure. It’s widely accepted that security should be integrated and continuous. Fortunately, virtualization provides a solution to many common security issues.

In environments where security policies require systems to be separated by a firewall, two systems can securely reside within a single physical box. In a development environment, every single developer can have their own sandbox, and these sandboxes are immune to other developers’ runaway or rogue code.

How to Use Hyper-V Virtualization Technology

This portion of the tutorial will use Hyper-V for Windows 10 as the primary example. There’s no need to download anything, as Hyper-V comes preinstalled on Windows 10. You will, however, still be required to activate Hyper-V before you can use it.

The Hyper-V stand-alone version will run on bare metal. In other words, you don’t have to install it on an underlying host operating system. In this instance, you’ll lose the ability to run extra server roles on the physical machine, but it can be cost-effective. If you don’t use the Windows Server 2008 host, then you won’t have a graphical interface. The stand-alone Hyper-V Server must be administered via the command line.

With Hyper-V, every virtual machine is saved to a VHD file. This is the same file format used by Virtual PC 2003 and 2007 as well as Microsoft Virtual Server 2005. The VHD files created by Virtual PC and Virtual Server can be used with Hyper-V, but it’s worth noting there are some virtual hardware differences. This means the virtual machine operating systems might need to have their drivers updated.

VMware utilizes the VMDK format, but you should be able to convert VMDK images into VHD files via the System Center Virtual Machine Manager. Alternatively, you can do this by using the Vmdk2Vhd tool.

The Vista Hyper-V management tool lets you remotely manage Hyper-V from your Vista desktop. You should have Service Pack 1 installed before installing and using the management tool.

You can also use Microsoft System Center Virtual Machine Manager 2008 to manage Hyper-V virtual machines as well as virtual machines running on VMware ESX v3 and Microsoft Virtual Server. If you integrate with Microsoft SCCM, you get access to reporting, templates, and other functionalities designed to make creating and managing virtual machines much easier.

You can choose between the following three virtual networks for use on a Hyper-V server:

Although users won’t see this terminology used in the interface, it’s important for you to understand the difference between emulated and synthetic devices so you can get the best performance out of your Hyper-V machines.

“Device emulation” refers to the way virtualization software handles hardware devices in Virtual PC and Virtual Server. The emulation program runs in the parent partition, which is the partition capable of requesting new partitions from the hypervisor. Most operating systems already have device drivers for these devices. They can boot with them, but they’re generally slower than synthetic devices.

Bear in mind, certain devices—like video card and pointing devices—can be booted in emulated mode before being switched to synthetic mode once the drivers are loaded. This can increase performance. To optimize performance, you should choose synthetic devices over emulated devices.

Once you’ve successfully installed an operating system on your Hyper-V virtual machine, you’ll need to install the integration components. This refers to a group of services and drivers allowing guest operating systems to use synthetic devices. They can be installed on Windows Server 2008 by going to the “Action” menu in the Hyper-V console and selecting “Insert Integration Services Setup Disk.” With certain operating systems, you’ll have to navigate to the CD drive to install components manually.

Virtualization management software was created to simplify the virtualization process. You can manually allocate resources to virtual machines, test them, create space for them on servers, and install patches when necessary, but dividing single systems into hundreds is time-consuming and resource-intensive because you’re responsible for running those systems, keeping them up-to-date, and safeguarding them.

When virtual machines are paired with a provisioning, monitoring, or management solution, you can automatically migrate systems to more appropriate hardware. This is extremely useful during maintenance or peak use periods. With effective virtual machine management tools, you can retask a bulk number of servers in a matter of seconds, depending on the time of day and workload. When a guest instance starts consuming more resources, the virtual machine monitoring system can move this guest to an alternate server with less demand or allocate extra resources from the central pool.

In short, virtual machine management is much more effective when dependable monitoring and management tools are implemented.

SolarWinds Virtualization Manager is a virtual machine monitoring solution designed to boost performance by rapidly rectifying any problems it encounters. This tool is a highly feature-rich Hyper-V virtualization solution with a dynamic interface. Data is represented graphically wherever appropriate in the forms of graphs and charts, making interpretation fast, easy, and accurate. The layout is widget-based, giving all key information a space of its own and preventing the dashboard from becoming cluttered. With VMAN, you can solve issues rapidly (sometimes with no more than a single click) because remediation actions are built in. This means you can address problems without needing to log in to a hypervisor. Performance insights support problem-solving, giving you visibility into capacity and usage of virtualized infrastructure, including virtual machines, clusters, containers, and alternative datastores.

One of the best VMAN features is the ability to reclaim resources back into the virtual pool. With VMAN, you can power down idle virtual machines and powered-off remote virtual machines. You can also do this for orphaned VMDK files. VMAN lets you delete snapshots (so resources can be reclaimed) as part of its VM sprawl control management functionalities.

This versatile tool can be managed across on-premises, cloud, and hybrid environments. It uses a robust alert system to keep you notified of any problems, with alert categories ranging from “critical” to “informational.” VMAN provides a powerful capacity planning solution, allowing you to predict network, CPU, memory, and storage requirements for both VMware vSphere and Hyper-V. 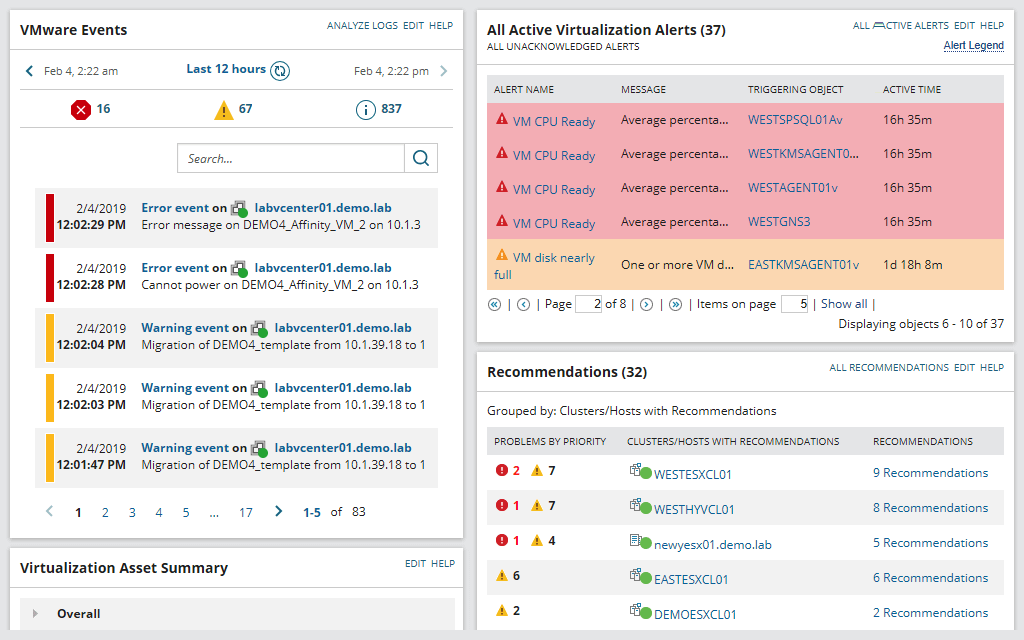 VMAN boasts many advanced functionalities beyond those mentioned, and these functionalities cover a range of Hyper-V virtualization concepts and operations. It combines sophisticated functionalities with user-friendliness, delivering a simple but effective solution. Click here for a 30-day free trial.

Getting Started With Hyper-V Virtualization Software

This Hyper-V virtualization tutorial has provided a definition of Hyper-V software and hardware virtualization technology, outlined key Hyper-V considerations and concepts, and given you insight into how to use and make the most of this technology. Hyper-V virtualization technology can be complicated and difficult to manage, but the right software can simplify and optimize the management experience. In my opinion, the best Hyper-V software on the market today is SolarWinds VMAN. VMAN is a user-friendly tool offering various features, many of which are ahead of the market curve. With VMAN, you’ll gain access to nuanced insights and enhanced resource planning capabilities.