Virtualization can be useful everywhere, whether for home office and small business use, or in large enterprises and data centers. Using appropriate software to manage those virtualizations is important—if you aren’t using the right tools, your virtual environment can be messy and ineffective at best, or buggy and non-functional at worst.

Virtualization comes in many forms and can be applied differently depending on what you’re trying to virtualize. For example, you can virtualize networks, desktops, applications, storage and server infrastructure, and data. I’ll go through the different kinds of virtualization, then look at software to create and manage virtual machines.

What Is Virtualization Software?

I’ll go through the different options available on the market, including the best virtualization software for Windows, Mac, and Linux today. When it comes to Linux virtualization software, some of the above tools can also be used on Linux operating systems, even though they were designed for Windows or Mac. However, RedHat Virtualization is made specifically for Linux operating systems. It’s easy to use and is based on the KVM (kernel-based virtual machine) hypervisor. Even though it’s a hosted hypervisor, a huge amount of development has gone into the maturity of this software, making it in many cases as fast as a system operating in a non-virtualized way.

It can support guest operating systems of other Linux distributions, Windows 7, 8, 8.1, and 10, and Windows Server distributions. It promotes high levels of scalability and can create large virtual machines to support huge enterprises. You can get free trial of RedHat Virtualization or purchase it on a subscription basis.

What to Know About Virtualization Software

VMware Workstation and other VMware products are generally considered the industry standard and are known as some of the best virtualization software options for both Windows and Mac host operating systems. Overall, the best option for Mac in my opinion is Parallels or VMware Fusion, with the Boot Camp providing basic functionality if you just want to be able to run a Windows OS alongside your Mac OS. Some of the above software can also run on Linux distributions, but the RedHat Virtualization tool is much faster, since it’s specifically designed for use on Red Hat Linux.

However, ultimately you need to choose the best virtualization option for your network and infrastructure setup. All these need monitoring tools to keep an eye on performance, as virtual machines and their accompanying virtual environments come with unique challenges.

Benefits of Monitoring Your Virtual Machines Monitoring is important because virtual environments have different challenges from physical environments. A guest machine doesn’t have direct access to the hardware—it goes through a hypervisor or other virtualization software. It’s vital for the hypervisor to function correctly and allocate the appropriate physical resources to your virtual machines as needed. Monitoring CPU and memory use and allocation is important for ensuring VMs perform as expected. In addition, you need to ensure network components and storage are working well, so you don’t run into bandwidth issues or capacity problems affecting your users.

Essentially, physical machines working with physical hardware can only use what the physical hardware has available. Virtual machines can be allocated as much of the physical resources as the administrator wants, meaning a computer with 10GB of RAM could host 10 guest operating systems, and allocate each guest 2GB of RAM, and just hope each OS doesn’t always need to use the full RAM allocation. This “overprovisioning” is common but can cause problems if not managed and monitored correctly.

A good virtual machine monitoring tool should be able to look at the guest OS layer as well as the virtualization layer, to ensure data from both “sides” matches up. The virtual environment should be treated, not one machine at a time, since you need to keep an eye on your entire virtual infrastructure to reduce VM sprawl and scale effectively. Creating too many virtual machines then leaving them to operate unchecked can cause major performance issues if you don’t have a management tool in place.

All the above tasks are easier with the right software. My top pick for a virtualization management tool is SolarWinds Virtualization Manager (VMAN). VMAN provides comprehensive VM monitoring, including capacity planning, VM performance monitoring and management tools, and complete visibility across Hyper-V and VMware virtualization software. It can also provide information on your entire virtual infrastructure, such as host machines, VMs, cluster organization, virtual storage such as vSANs, and performance metrics. 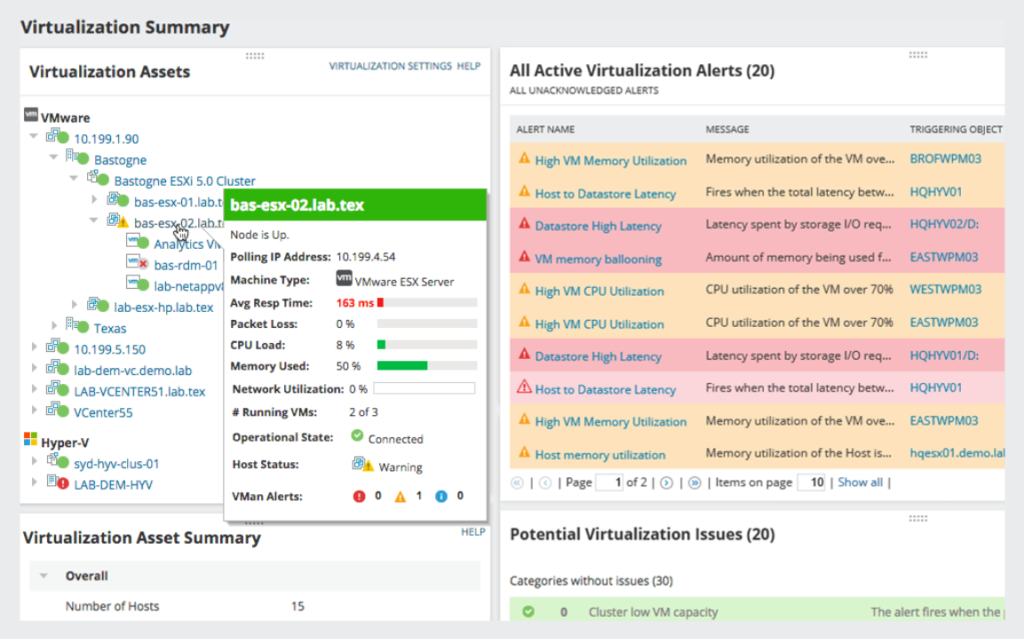 SolarWinds VMAN has built-in tools to help reduce VM sprawl, such as powering off idle VMs and deleting powered-off VMs that haven’t been used in a while. Finally, VMAN has useful prediction tools for keeping track of network and storage needs, CPU and memory functionality, and complete visibility across your entire stack (whether it’s virtual infrastructure, storage, or server). I also like its free 30-day trial, so you can test it out for yourself.

How to Choose the Best Virtualization Software

The virtualization software you choose depends to a large extent on what operating systems your current devices already run and what infrastructure you have set up. It also depends on what level of security you need, whether you want bare metal or hosted hypervisors, and what kinds of operating systems you want to virtualize. As I mentioned above, there are a few big players on the market, but ultimately you need to choose what fits with what your company is trying to do.

In all cases, you need to ensure your virtual machines and accompanying software are functioning correctly and performing well, and for this I recommend using a comprehensive monitoring software. My top choice is SolarWinds Virtualization Manager, because of its ease of use, numerous features, and cost-effective pricing.