Traceroute is one of the most widely used tools for network troubleshooting. It works by tracking packets as they move between computers and examining the path they take. Traceroute can then determine whether any delays or losses occur along the way and help you pinpoint where exactly a packet gets slowed down.

Traceroute has been around for a long time. But despite its longevity and widespread usage, there are other, more modern tools capable of helping you with the same problems traceroute is designed to address. As this guide will show, a good traceroute alternative can provide a more complete picture of the issues facing your network while helping make things easier for IT staff and administrators. My recommended tools are SolarWinds® Network Performance Monitor (NPM) and SolarWinds Engineer’s Toolset™ (ETS).

Traceroute is a command used for network troubleshooting. It comes as a command-line tool in Unix systems, and it’s available on Mac OS as a graphical traceroute tool through a network utility. In Windows operating systems, the command is called tracert.

Traceroute, or tracert, uses what are called “echo packets” to look at the path between your location and a remote destination. It sends a packet and displays a list of the jumps or routers the packet goes through along with the IP addresses for each jump. It also shows the latency (or delay) in milliseconds for each step of the path.

You can use traceroute to see whether any of the hops have a large latency or whether the latency between each hop is consistent. In some cases, you might see the * symbol next to a jump, which indicates there was no response—this could equate to packet loss at these points. Using traceroute in this way can help you determine how your network pathways are performing and identify issues along the network pathways for troubleshooting.

Using a traceroute alternative can help administrators get the benefits of traceroute and additional features supporting faster and more efficient troubleshooting. In many enterprise settings, for example, IT professionals use traceroute alongside several other tools. They have to piece together these tools and work out integrations between them, when in some cases they could be using a more comprehensive network monitoring and troubleshooting solution. 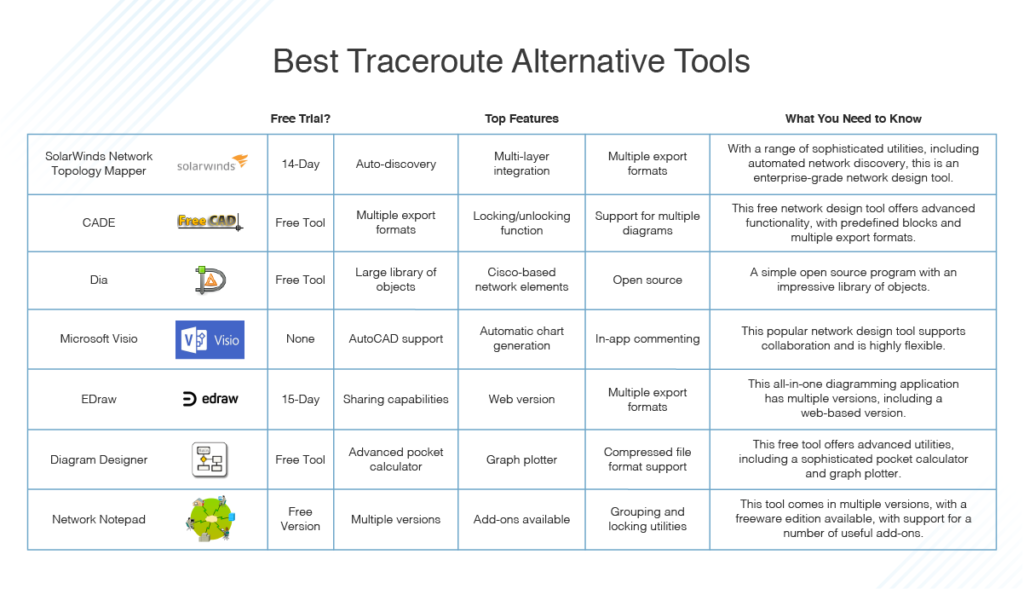 There are a wide variety of network trace tools on the market. Some of them are relatively basic, and others are comprehensive. Below are my top picks for traceroute alternative tools.

My number one pick for companies seeking a traceroute alternative is SolarWinds® Network Performance Monitor. NPM is a general network performance monitoring tool with a wide set of features designed to assist with network troubleshooting and management. Alongside its monitoring, alerting, and reporting tools, it includes a special feature called NetPath™ that is comparable to traceroute.

The NetPath feature is a graphical traceroute tool you can use to measure the performance metrics of each node and links between your services and end users. NetPath is designed to provide greater detail about your network traffic paths and more actionable insights for remedying delays. In particular, NetPath makes it easier to identify and dig deeper into problem areas with its color-coded interface. Traceroute provides static text for you to use to identify problems. The NetPath interface and visual routes is built to make it easier to spot problem areas and focus on specific objects and view potential actions that you can take to resolve issues. With NetPath, you can even hover over objects to look at in-depth displays of configuration information, which isn’t available in traceroute.

Additionally, NetPath provides historical path views, which are useful for determining whether a node is at the root of slowdowns. In contrast, traceroute does not provide historical information—only displaying data on the current state of a path.

Alongside normal hop-by-hop traceroute capabilities, NetPath allows you to create a multi-path map between a Windows node and a source. You can also add branch office connections and critical services to create an application and service map based on the network infrastructure. This allows you to determine how a network issue might be affecting a problematic application.

In contrast, traceroute commands don’t provide a way to generate multipath maps. In modern networks, traffic often travels across multiple paths, including on different paths in each direction. A single traceroute command shows hop-by-hop details of the single path taken. To see more, you must run a series of traceroute commands and manually track and analyze which paths have been probed. This can make it more difficult to determine which path a delay is occurring. With the multi-path maps in NetPath, you can more easily see the paths traffic is taking and quickly identify slowdowns.

Engineer’s Toolset is another powerful tool from SolarWinds. ETS is a networking software with a collection of networking tools for fast and easy troubleshooting. With automated network discovery and switch port mapping as well as real-time monitoring and alerting, you can easily monitor your network performance in a similar way to a traceroute tool.

But unlike traceroute, ETS includes numerous network performance and tracking tools designed to provide additional functionality, such as a response time monitor, memory monitor, CPU monitor, and interface monitor. You can also perform troubleshooting tasks with ease by using the software’s ping sweep and DNS analyzer. These tools track device availability, memory utilization, and CPU load, and they analyze memory utilization and display information on DNS hierarchies and relationships. Ping sweep lets you know which IP addresses are already in use and which ones are free, and the software’s traceroute tool displays visual information on the hop-by-hop pathways, so you can more easily understand them.

If you want to stress test your network, you can use the tool’s WAN killer, which will generate random traffic on your connection. You can adjust the specifications of this traffic, including packet size, bandwidth, and the percentage of bandwidth to be used.

Engineer’s Toolset is free to try for 14 days.

This is a free tool capable of displaying path changes throughout your network and allowing continuous or timed probing. Unlike traceroute, the tool alerts you when it detects a path change. Like traceroute, you can use Traceroute NG to analyze TCP and ICMP paths, and it will produce a .txt logfile so you can see the results of your traces. It supports IPv4 and IPv6 setups.

Traceroute NG is intended to be the “next generation” of traceroute, and it’s suitable for a small business or an individual who wants access to basic traceroute capabilities. However, it has much in common with the original traceroute, and for a professional IT setting, it may not have the additional functionality you need to keep your network performing optimally.

Traceroute NG is free to install and use. You can download it here.

Open Visual Traceroute is another free tool, and it comes with several utilities to perform network troubleshooting. The traceroute feature lets you see the path your packet is taking from source to destination and displays this on a 3-D world map. The network packet sniffer, meanwhile, shows you the data being sent back and forth between the two locations (for example, between the internet and the local system).

Open Visual Traceroute also includes a WHOIS feature, enabling you to get public information about a domain. It displays the WHOIS information and network packet sniffing results alongside the world map, which can also be presented in 2-D for operating systems having problems with the 3-D format.

Though this tool is free and the visual route between source and destination is an interesting functionality, it doesn’t provide significantly more functionality than basic traceroute. For an enterprise wanting to focus on network performance and monitoring, you may need something more high-powered.

Open Visual Traceroute is compatible with Windows, Mac OS X, Ubuntu, and openSUSE systems. You can download it here.

This is a slightly different tool to consider; unlike the other tools on this list, it doesn’t come with a graphical interface. A free visual application for Windows, WinMTR combines the functionality of traceroute and ping in one tool.

Ping and traceroute are the most basic network diagnostic tools and having them together in one place is extremely useful for network administrators and IT professionals. You can run tests between the host where the application is installed and a destination host you specify. WinMTR will then show you a hop-by-hop path of the packet, and it will check the quality of the connection between each of the nodes.

This tool is only available for Windows. If you need a Linux version, you’ll want to consider a WinMTR alternative like MTR or Angry IP Scanner.

WinMTR is completely free, and as such, it’s useful for basic network connectivity and troubleshooting tests. However, if you need more functionality for comprehensive network testing and troubleshooting, you’ll want a premium tool like those from SolarWinds.

Though traceroute is a tried-and-true networking tool, it’s relatively limited in its application. There are a broad range of modern tools designed to support and supplement the capabilities of traceroute. My top choice for business and enterprise use is SolarWinds Network Performance Monitor, as it incorporates basic network troubleshooting tools and a range of powerful network monitoring and management features to provide a full package for an IT administrator or manager.

Alternatively, if you’re not looking for a premium solution, Traceroute NG provides several basic tools in a free, easy-to-manage console so you can streamline your network troubleshooting processes.