Since almost everything we own is connected to the internet, it’s time to take another look at cybersecurity. The nature of cybersecurity threats has changed since the early years of the web: cybercriminals are getting more sophisticated and less obvious. According to the Verizon Data Breach Investigations Report, in 2018, 74% of data breaches were caused by phishing attacks or fraudulent emails intended to get people to share sensitive information. And 83% of InfoSec professionals—the best of the best when it comes to cybersecurity—were victims of phishing attacks.

The odds of you being targeted by some kind of cybersecurity attack at least once, however minor, are good. Anyone can have a bad day and click on a well-disguised malicious link while they’re distracted. With all the personal information we store online, you can never be too careful. That’s why cyberthreat intelligence is so important.

What Is Cyberthreat Intelligence?

In general, it refers to the information used by an organization to better understand past, current, and future threats. Threat intelligence provides the context necessary to make informed decisions about your network security, especially after an attack has occurred. Who’s attacking you and why? How much damage could they do in your system? Where are your system vulnerabilities? The answers to these questions are essentially the building blocks to a disaster readiness plan.

We call cyberthreat intelligence a cycle instead of a checklist because arming yourself against security requires constant vigilance and constant readiness to learn. Your job isn’t done once you’ve averted one crisis. Take what you learn from each cyberthreat analysis cycle and apply it to the next one. This extra step helps you better respond to threats in the future.

Cyberthreat intelligence isn’t a solution, but it’s critically important to creating one. If you have a working understanding of security threats before you step up to the drawing board, you’ll be better equipped to build a functional plan for securing your network. 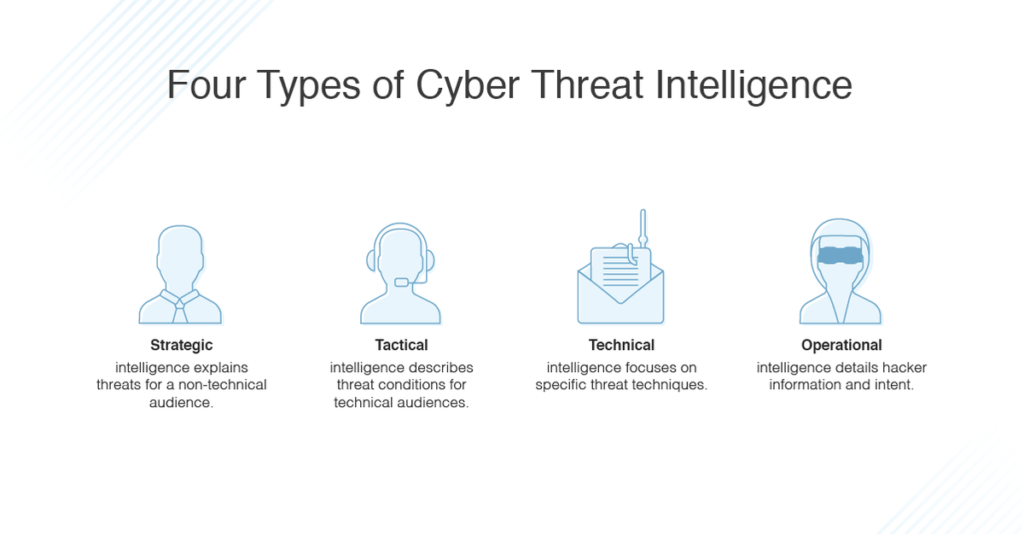 The four main types of threat intelligence are strategic, tactical, technical, and operational.

Why Is Threat Intelligence Important?

Cybersecurity threat intelligence is important for anyone who stores sensitive information on a connected device—which pretty much includes everyone. Even if you already have firewalls and other security measures in place, staying up-to-date on the nature of threats is critical for securing your systems. Large enterprises are especially vulnerable to cybersecurity threats because they’re so spread out, meaning the IT team may not know one of their departments has been hit until it’s too late. The varied nature of cyberattacks today makes cybersecurity threat intelligence and awareness essential.

As important as security threat intelligence is, analyzing all the raw data manually would take a long time, and you’d probably miss something. Luckily, there are security solutions currently on the market that can help with the task. SolarWinds® Security Event Manager is a great piece of tech for detecting and responding to security threats in enterprises of any size. On the front end, built-in threat intelligence feeds automatically identify potential threat actors and alert you to their presence in real time. With automated incident responses you can configure SEM to automatically block IP addresses, kill applications, or disable accounts when a possible threat is detected.

Still, sometimes cyberattackers are successful and manage to get into your system. SEM makes post-attack analysis easy, with advanced search and forensic analysis options to help you unpack attacks for the investigative, response, or auditing purposes.